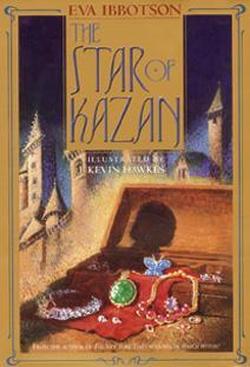 The Star of Kazan - Eva Ibbotson
Annika has never had a birthday. Instead she celebrates her Found Day, the day Ellie and Sigrid found her as a baby abandoned in a church. Ellie is a cook, and Sigrid is a housemaid in a house in Vienna owned by three eccentric professors, and for eleven years Annika has enjoyed living in the servants' quarters, learning how to cook the Christmas Carp and to polish parquet floors to perfection. Still, every night Annika dreams of one thing: her mother stepping out of a carriage in her lovely clothes, smelling of French perfume and holding out her arms to her long-lost daughter.

Vienna offers Annika many distractions, from the music to the pastries to the glorious Lippizaner stallions. She has many friends, too, including the very old woman next door who regales Annika with stories about her performing days and her countless admirers, such as the Russian count who gave her the legendary emerald, the Star of Kazan.

Then one day a glamorous stranger arrives at the professors' house. After years of guilt and searching, Annika's mother has finally come to claim her. Annika is no servant, she learns, but an aristocrat whose true home is a castle called Spittal. But at crumbling, spooky Spittal, Annika discovers that all is not as it seems in the lives of her newfound family . . .

Annika's saga, deftly plotted and populated with a large cast of unforgettable characters - some delightful, some despicable - is a timeless, captivating treat for readers young and old.
Powered by